In a few weeks, summer will officially be with us. You know what that means, right? It’s time to plan out how you’re going to make your biggest and best summer dreams a reality. Yes, your summer class and work schedule may get in the way, but you still have plenty of time for that vacation you have been counting down to and some leisurely days. There is no better way to fill the extra time than a selection of awesome music festivals. Incredible music, nice weather and perfect vibes – sign us up!

Fortunately, despite financial troubles causing many festivals in Canada and abroad to downsize, there are still a number of great options hitting the 6 this summer. Check out six of our favourites.

Who: Jim Cuddy, Oh Susanna, Reuben Bullock of Reuben and The Dark and more

Where: Erin Fairgrounds in Erin, ON

What: If you want to enjoy a unique festival experience while supporting a worthwhile cause, Waterstock is the event for you. The issue: major corporations continue to exploit outdated provincial water-taking bylaws originally intended for agricultural and value-added industrial use, often for the purpose of ‘bottling.’ This reinforces water uncertainty for farmers and lower-income communities. As support across Ontario grows for the phasing out of water permits for the purpose of bottling, Waterstock aims to be a physical display of that support, backed by live music, food and drinks from Ontario-based chefs, breweries and wineries, art installations and an impactful parade-style protest.

How: Tickets are available online for $10. 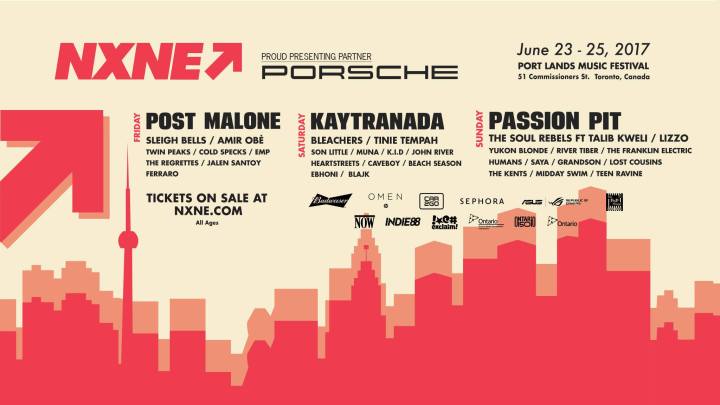 Where: Port Lands in Toronto, ON

What: NXNE, the annual 10-day music, arts and gaming festival and conference celebrating its 23rd anniversary in Toronto this year, is once again culminating in an epic three-day fiesta at the Port Lands. In between musical performances from emerging and established voices like headliners Kaytranada and Post Malone, Bleachers and K.I.D, guests can visit the comedy tent or hop on various carnival rides and games.

How: Tickets online start at $80 for a single day or $125 for full-weekend access. 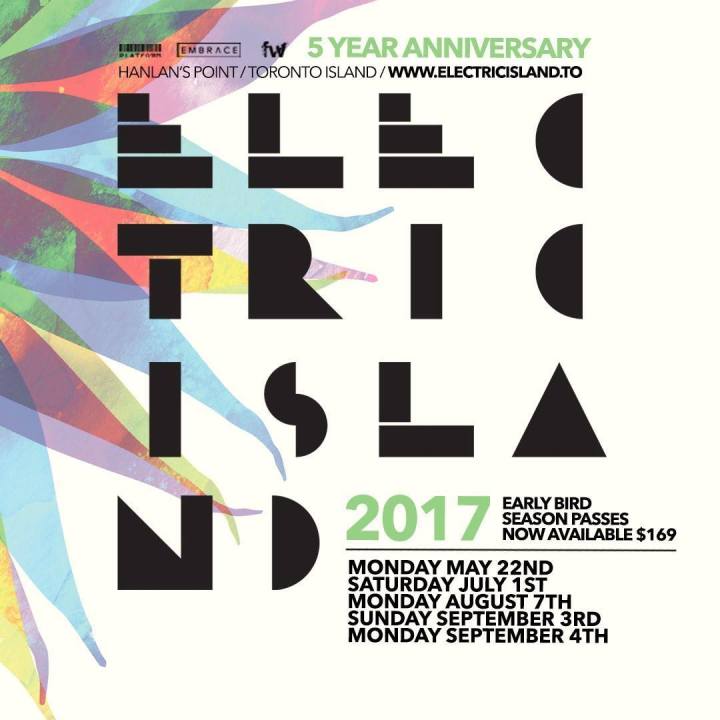 Where: Currently scheduled for Hanlan’s Point on Toronto Island (TBC) [UPDATE: On June 23, the festival announced a move to the Port Lands for the July 1 show.]

What: Entering its fifth season, Electric Island remains a hidden gem as far as Toronto electronic/dance music festivals go. This year’s event series launched on May 22 at Woodbine Park with mesmerizing performances from Eats Everything and Joris Voorn. However, the Victoria Day installment occurred off-site from the festival’s usual location at Hanlan’s Point, which remains closed due to unsafe water levels. The upcoming Canada Day event continues to be advertised for Hanlan’s Point, despite city spokespeople saying permits have been cancelled through to July 31. It is yet to be determined where, and if the following events will go on.

How: Various ticket packages are available online and start at $49.99 for a single day general admission pass.

Who: Above & Beyond, Dillstradamus, DJ Hanzel, DVBBS, Malaa and more

What: Toronto’s world-famous electronic music festival Digital Dreams enters the 2017 festival season with a fresh look, vibe and name, even moving from all ages to 19+. Described as a “boutique festival experience … with a familiar feel,” Bud Light Dreams Festival features its own long list of big names – Above & Beyond, Dillon Francis in Dillstradamus and as DJ Hanzel, DVBBS, Steve Angello, Bondax and more – spread across two days and three stages.

How: GA and VIP two-day and GA single-day passes are available online.

Where: Burl’s Creek Event Grounds in Oro-Medonte, ON near Barrie

What: If you ask fans, no festival seemed to get harder-hit by festival downsizing and budget cuts than WayHome Music & Arts, especially when you view it next to its always-compared competitor Osheaga one week later in Montreal. But there is no denying that WayHome still delivered with a bill of buzzed-about artists and up-and-comers hot on the festival scene. Plus, if the artists alone are not selling it for you, the WayHomies you will meet, the food you will taste and the art you will see offer plenty of extra incentive.

How: Tier 2 GA and VIP weekend passes are available online and start at $249.99.

What: Coupled with the revamped Digital Dreams, Veld is the second half of the highlight of the summer for electronic and rap/hip-hop music fans in Toronto. While this year’s lineup is missing Veld fan-favourite deadmau5, there is no predicting what special guests the announced performers have lined up.

Which festival from our list are you most excited for? Did we miss your fave? Share your picks with us in the comments below or on Twitter @RUtvNews!

(Header photo of VELD Music Festival in 2015 by Angela McLean)

The Queen’s Gaels handed the Ryerson Rams their eighth loss of the season on Sunday night. Read the latest article by Andrew Yang on our website today! Link in bio! 📷: Hung Le
Ryerson Student Union Elections end today and here’s what the candidates want to do about the RSU. Find this informative article by @mariamnouser on our website. Link in bio! Picture Credits: @manuelaavega
Unsurprisingly, fans were pumped when the @mapleleafs held an outdoor practice at Nathan Phillips Square on Thursday🏒 . . Link in our bio for the full story 📸: @mattrodrigo_
For years, students applying to the undergraduate Journalism program have been asked to submit a portfolio and entrance essay. 📝 The submission requirements for the program are now grades-only. See the full story on our site - link in our bio!
Taryq Sani led the Rams to victory in his debut against the Paladins Friday night🏐⚡️link in our bio for the full story.
Last night, the Rams took the victory over the Paladins to protect their perfect record this season, despite a disappointing play. The win comes after getting the top spot in U SPORTS on Tuesday🏐💥.. Read the full story at the link in our bio. 📸: Christian Bender/ Ryerson Rams Athletics