(By: Angela McLean and Josie Mills)

Nothing beats the thrill of seeing your favourite artists live. The lowering of the stage lights, the ear-piercing screams from a united crowd and that first note of music filling the venue…for any music lover, these wonders simply never get old. With so many incredible artists already setting their sights on Toronto in 2016, the list of star-packed shows is getting longer and harder to sort through. Here at RUtv News, we always have your back and we are sharing the inside scoop on some of the year’s most anticipated tours that are hitting the city in 2016. You can thank us later.

Even though he does not have a debut album out yet, Norwegian DJ and record producer Kygo has received international attention with his remix of the track “I See Fire” by Ed Sheeran. The track reached over 33 million plays on SoundCloud and another 50 million views on YouTube. He has also remixed other big artists like Coldplay, Avicii and Diplo. His long-awaited album is set to be released on February 16 with Sony and Ultra Records. Kygo will be in Toronto performing with DNCE, an American pop/rock band lead by Joe Jonas, and Gryffin, a dance/electronic/soul performer from New York, on January 22 at the Enercare Centre. – JM

Twenty-year-old Troye Sivan has taken the world by storm recently. After two successful EPs, he released his debut album ‘Blue Neighbourhood.’ It is an album that has become known for its love songs about boys that both genders are going crazy over. Sivan started out on YouTube and quickly rose to a well-known personality. He even scored a role in X-Men Origins: Wolverine. Troye was named one of the “25 Most Influential Teens of 2014” and with this already sold out tour date the buzz will not be ending anytime soon. Tickets were sold out to the Toronto show in minutes, so you will have to check other ticket selling websites to experience Troye’s emotional electronic dream at the Danforth Music Hall on February 26. – JM 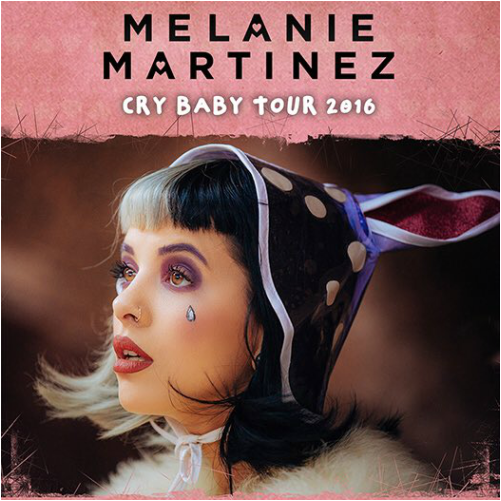 Named after her debut album, ‘Cry Baby,’ released in August 2015, the eccentric but extremely talented singer and songwriter Melanie Martinez will be turning the Danforth Music Hall into a dark electropop haven. Some may know her as a contestant on season three of the popular talent showThe Voice in 2012. She is actually one of the most popular artists to come out of that season and her song “Carousel” played on the popular television series American Horror Story: Freak Show. Although her tour date in Toronto is currently sold out on Ticketmaster, try to get your hands on some tickets to catch Martinez at the Danforth Music Hall on March 21. – JM

A self-proclaimed “Punk/Emo rock band,” Marianas Trench has found international success with their genre-crossing music that is emotionally vulnerable and tells meaningful stories. Their latest album, ‘Astoria,’ peaked at #2 on the Billboard Canadian Albums chart. The band’s frontman, Josh Ramsay, has described the new music as being inspired by the band’s love of 1980’s fantasy and adventure films. Hear that new music and old favourites when the guys kick off the Never Say Die Tour on March 9 in Kingston, Ont. Great seats for their Toronto show are still available! – AM

After Toronto-born band Metric toured Europe, the southern U.S., and Mexico throughout the fall of 2015, they extended the tour to the rest of the U.S. and Canada co-headlining with Death Cab for Cutie. Don’t miss your chance to see these two bands rock out back-to-back on the ACC stage on March 23. – JM

You know and love them for their catchy and passion-filled music, including the hit singles “Cha-Ching” and “Anything.” Canadian pop/rock group Hedley has been impacting Canadian radio and charts since 2005 with the release of their debut self-titled album. Last year, the guys released their sixth critically acclaimed studio album, ‘Hello,’ that immediately shot to #1.  The band rewarded fans with the announcement of a new headlining tour travelling across Canada in 2016. To make the announcement even sweeter, Hedley enlisted the support of their talented Canadian friends Carly Rae Jepsen and Francesco Yates for a jam-packed show! Is there really any better way to celebrate the end of the winter term at Ryerson? – AM

For any alternative pop fans, The 1975 is an act that needs to be on your concert bucket list! Their live show is filled with incredible vocals, courtesy of lead vocalist Matty Healy, and eye-catching visuals. The 1975 will be touring throughout 2016 in support of their sophomore album, due out February 26, that we have already crowned the best-titled album of the year: ‘I Like It When You Sleep, for You Are So Beautiful Yet So Unaware of It.’ Their Toronto show on May 20 will mark The 1975’s first at an outdoor venue in Toronto, and we are very excited to hear their music fill the lakeshore air. – AM Demi Lovato & Nick Jonas – Future Now: The Tour
July 23 – Air Canada Centre
Best friends and Disney-alums Demi Lovato and Nick Jonas gave fans the surprise of a lifetime last year after announcing that they would be taking their new music on the road together for a joint tour across the U.S. and Canada. Fourty-four shows have since been announced, including a stop at Toronto’s Air Canada Centre on July 23. This is not the first time Lovato and Jonas have toured together – in 2008, Lovato opened for the Jonas Brothers’ Burnin’ Up Tour and, in 2014, Jonas took on the role of musical and creative director for Lovato’s Neon Lights Tour. This time around, Lovato and Jonas have a number of great surprises up their sleeves. Lovato recently responded to a fan’s tweet about the tour, saying, “We want it to be more of an experience than a concert. More connection with the audience and more artsy.” She sold us! – AM
Planning on attending any of these amazing shows? Let us know! Find us on Twitter at @RUtvNews.